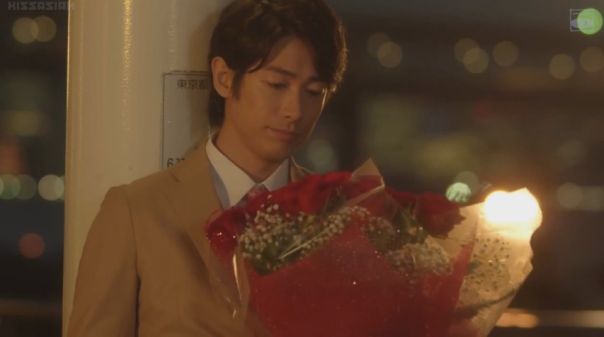 I’m glad that this episode showcased more of our OTP’s married life. At least, the focus shifted back to romance, away from the exhausting corporate dramas and family feuds. Phew! It’s a breather if you ask me.

Anyways, there’s a major turning point in the end. It’s a little tragic, but I consider it a welcome development, plot-wise.

Misaki tells Chiwa to leave simply because, unlike her, the latter can’t help Hokuto in any way. Can’t stop rolling my eyes here. Thankfully, Hokuto arrives just in time to see the two girls talking. Ignoring Misaki’s jeers, Chiwa smiles and tells him that she brought gyudon, a meal which she thinks can relieve his stress. She then bids him goodbye and tells them to enjoy the food.

Hokuto and Misaki goes back to work. In fairness to Misaki, she wasn’t just bragging about helping Hokuto. She proposed that her company tie up with Mamiya Fiber and launch a new clothesline together. This move will, of course, offset or at least minimize the impact of any losses due to the failed joint venture with Rene Claire. Hokuto heaves a sigh of relief and thanks Misaki for the big help.

Hokuto, finally arrives home and sees Chiwa’s home cooked meal, along with a note for him to eat it. He watches Chiwa soundly sleeping in their room. He looks lovingly at his wife and me thinks Chiwa’s small gesture warms his heart.

The next day, Chiwa hears from her co-workers that Yagami quits from work. She’s obviously surprised since Yagami didn’t tell her anything. She asks Yagami about it and he says sorry for not informing her earlier. It’s just that he didn’t have the chance to do so because she seems too tangled up with her own problems. As recompense, he invites Chiwa to go to his apartment after work.

Once again, the Mamiya clan is gathered to talk about their company’s mismanaged venture with Rene Claire. As expected his cousins ganged up on him, chiding that he’s not the right person for the job. But instead of telling the truth, Hokuto took the blame and apologizes for not “understanding the project”. The Chairman is clearly disappointed and warns that if ever he makes the same mistakes again, he’ll have to remove Hokuto from the President’s post. Hokuto welcomes the warning and announces that he’s currently making preparations for a new product launch with Michel Hearts. All he’s asking is for them to give him another chance to amend his mistakes. 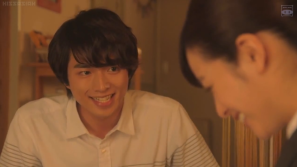 Chiwa agrees to go to Yagami’s place. She’s kinda surprised that his apartment is super clean. He serves her with herb tea from the chamomile flower he planted himself. Aww! He then shows her a portfolio. He explains that the reason why he decided to quit from work is because he’ll be putting up a business with his college senior. It’s an online food business. Their goal is to promote Japanese food using the internet. He invites her to team up with them since they’ll be needing a woman’s opinion. Chiwa is tempted to join but being married, she still needs Hokuto’s permission.

Takayuki’s Dad somehow knows that his son is behind the recent mismanagement with Rene Claire. Takayuki arrogantly brushes off the issue since Hokuto already took the blame. But his Dad isn’t as confident, knowing that this issue will not be taken lightly and the Chairman will know Takayuki is behind all these. Dad says he’s nothing but a troublesome son who sets them all back. Ouch! Mom consoles that their son is just doing his best in his own ways.

Chiwa is at her Dad’s again. It’s obvious she’s forcing herself to look happy. She then receives a call from Hokuto. He asks why she didn’t come home and if she’s still angry at him. Chiwa answers that she’s not angry anymore. It’s just that she doesn’t feel like his wife anymore. Hokuto insists that she’s his wife no matter what and it’s a wife’s job to stay at home. This piqued her pride. Being his wife doesn’t mean she has to daze all day, waiting and wondering what he and Misaki are doing. Hokuto insists that his relationship with Misaki is purely business and he can’t just break off with her. His explanation seems to make matters worse as Chiwa took it that he values his career over her feelings. Well, she has her own life and she wants to stand on her own two feet.

After the call, Chiwa’s Dad asks if they are already considering divorce. Thankfully, Chiwa assures that they’re not. With her assurance, Dad figures that since her birthday is in two days, she must ask for an expensive birthday gift from Hokuto. But more important than the gifts, Chiwa wonders if Hokuto even know her birthday. To cheer her up, Dad volunteers to buy her a gift. BUT, since he doesn’t have money, he wants to borrow 10,000 yen from her. Haha!

After their successful product launch, Hokuto and Misaki entertains some questions from reporters. They are ask about their comment on being a rumored pair. Before answering, Misaki suddenly kisses Hokuto in front of the media. She tells them that they’re just business partners and sometimes their closeness is just being misinterpreted. Yeah, we get that but do you really need to kiss him? Duh!

Chiwa decides to quit from work and join Yagami in his business. The new partners spend their day looking for an office to rent and when they finally see one, Yagami excitedly embraces Chiwa. Though surprised, Chiwa didn’t comment about it. It’s the very scene Hokuto and his friend witnessed. Hokuto’s friend asks if Yagami is his wife’s boyfriend and remarks that they’re quite a match. I really think that question is way too insensitive. How could you ask someone about his wife’s boyfriend? That’s rude. Hokuto acts cool and says he knew the guy as his wife’s junior at work.

Hokuto is more affected than he lets on. He finally gives in and calls Chiwa to ask why she’s with Yagami at a real estate agency. However, Chiwa get’s angry that he’s checking on her again and hangs up. 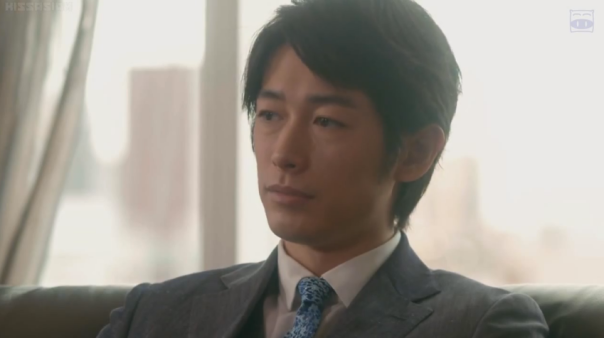 Souma informs Hokuto that Chiwa resigns from work to help Yagami in his online business. In a sense, they’re business partners just like him and Misaki. Souma further taunts, asking if he understands how Chiwa feels now. Hokuto is jealous alright. He can’t possibly understand why on earth would his wife help out in another man’s company. She didn’t even stop working when he told her to but now she’s quitting for another man’s sake! Souma explains that a woman doesn’t only work for money. There’s also other factors like self-fulfillment and self-worth. Hokuto sulks nevertheless. Souma teases that he’s acting like a child and sensibly asks if he ever said “I love you” to Chiwa.

Chiwa and Yagami meet with, Okudera Wataru, their business partner. They proceed with work and Chiwa suggests that they enlarge the picture in the website to attract attention. Both Yagami and Okudera agrees. In the middle of the meeting, Chiwa then receives a call from her former supervisor, Midori, who says it’s unfortunate that she quit because she’s someone who has charm and strength. Chiwa doubts if it’s really the case.

Meanwhile while Chiwas is busy with her call, Okudera admits he finds Chiwa cute. Yagami doesn’t like the idea though and lies that Chiwa is already his girlfriend. Thankfully, Okudera willingly backs off.

Chiwa is undeniably happy. For the longest time, she finally feels appreciated. Yagami is glad to hear that and asks what she wants for her birthday. However, Chiwa politely declines. She can’t possible be that insensitive to demand something when he just started his business. Her concern only makes her more amazing for Yagami. In that case, he volunteers to cook for her instead.

It’s Chiwa’s birthday and she’s celebrating it with Yagami. Like he promised, he prepared a delicious meal for her. He proudly shares that the ingredients he used came from his family’s farm. Looking at his family picture, Chiwa comments that it’s obvious he was brought up in a happy environment. Yagami smiles. They are the reason why he wants his business to succeed. He plans on getting the raw materials from his home town. It’s his way of returning the favor to those who supported his studies in Tokyo. Chiwa can’t help but be proud of him. His future wife will surely be lucky to have him.

Yagami becomes silent. He uses the opportunity to confess. He loves her. He knows it’s strange, especially that she’s married but he never really considered her as someone else’s wife. After all, she doesn’t look like one. He asks, “Can’t I be the one for you?”. Aww!

On cue, Hokuto calls. He wants to meet up ASAP and he only has 30 minutes to spare before his business meeting starts. Being hard-headed, Chiwa refuses to go and blurts out that she’s not a pizza delivery man who can come anytime. Still, Hokuto begs her to come because he wants to celebrate her birthday together. Chiwa is quite surprised that he remembers. Hokuto: “Of course! It’s my wife’s birthday”. Despite Hokuto’s plea, Chiwa remains passive.

Meanwhile, Hokuto patiently waits for Chiwa. He bought her a cake and a bouquet of flowers. He really did prepare for her birthday. Aww! He then receives a call from Misaki, asking where he is because their client has arrived. Misaki reminds that if he won’t come, he’ll never get another chance like this again. However, Hokuto is resolved. He really can’t make it. Aww! 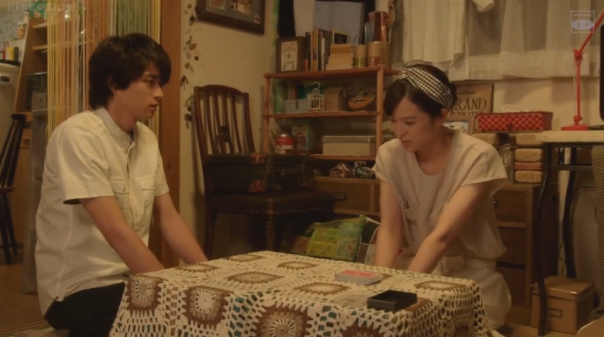 Chiwa continues her nonchalance acts. To kill time, she invites Yagami to play cards. But Yagami knows something’s off. He asks about the call and he wants to know about her response to his confession. Chiwa sadly says sorry. It’s hard for her to explain. Her husband is prideful and insensitive. He never said he loves her or anything like that. She’s already tired but… Yagami smiles. He understands that despite Hokuto’s shortcomings, she still love him.

Yagami: Then.. You have no choice but to go. 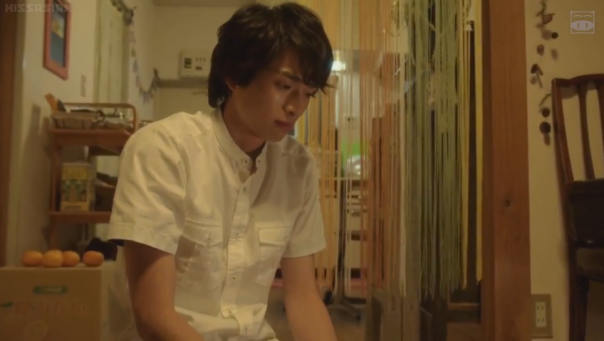 Without wasting time, Chiwa grabs her belongings and runs to find her husband. Finally!

Gawd, the look on Yagami’s face is heartbreaking.

Chiwa arrives on time to see Hokuto standing near a post. She smiles at him and he shows her the birthday gifts he bought. And then… he passes out! Someone stabbed him in the side while waiting for Chiwa!