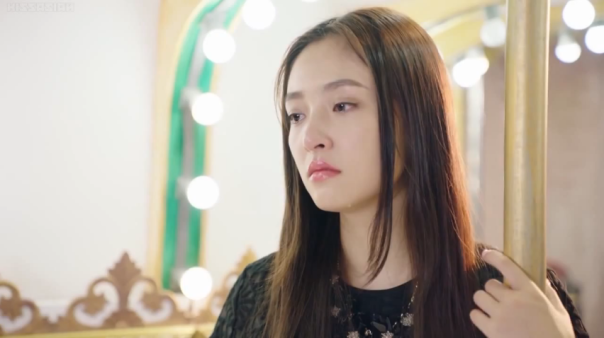 There’s a notable development in the romance area, especially in Ling Qiao’s end. Who would have guessed that the only way for him to appreciate Jing Zhi is for her to give up her feelings voluntarily and declare that she doesn’t need him anymore. Hail to reverse psychology!

The episode continues with Jing Zhi challenging Ling Qiao to a taekwondo match. He accepts but with his calm reaction, we get a hint that he’s not entirely convinced she poses real threat. After several puny and not to mention silly attempts, we can conclude that Ling Qiao’s right after all. Haha!

When she lunges a seemingly strong blow, Ling Qiao sidesteps to block the hit and pushes her backwards. This simple maneuver somehow works for Jing Zhi as it resulted to a close up, face to face moment with Ling Qiao. Haha! A few seconds later, Ling Qiao drops the defeated Jing Zhi, walking off like nothing happened. The kids laugh at her and all she can do is instruct them to delete their memories and crawl out (literally!). Haha! 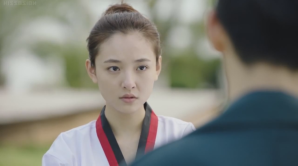 Ling Qiao gives Jing Zhi a piggyback ride home, asking if her waist still hurts. Jing Zhi lies that it doesn’t but reprimands him for putting all efforts on a friendly match. Ling Qiao then whacks her butt, it’s her punishment for purposely putting her life in constant danger. She’s naturally shocked and climbs down his back almost automatically. But his answer pleases her nonetheless and she can’t help but laugh, saying that contrary to what he claims, his actions prove he loves her too.

At that, Ling Qiao falls silent and in a serious tone, he tells her that she may have mistook his concern for love. Because their blood saved each others lives, a special bond was formed. They are connected in a way that if she dies, he’ll also return to dormancy. He apologizes for not telling her the truth and causing a huge misunderstanding between them. Jing Zhi is saddened by his revelation, realizing fully well that he’s only protecting her to protect himself and that she was just overthinking things.

With tears in her eyes she asks him “If you live for a long time, does it mean you won’t have a heart anymore?” Ling Qiao walks closer to comfort her but she backs off. This time she admits defeat, saying that if she can’t have love then she doesn’t want it and promises to leave him alone. She silently walks away, leaving a very confused Ling Qiao behind.

At the police station, Crystal is disgusted seeing Squid drooling in his sleep. Yan Zi laughs and says that Squid is not that bad. He teasingly adds that if she’s not allergy to seafood, then she should at least give Squid a chance. Right then, Xuan Xuan walks in to bring food for Yan Zi. Crystal and Squid leave to give them room to talk.

Xuan Xuan comments that Yan Zi is too skinny and worriedly asks if something’s wrong with him. Yan Zi just laughs it off but she maintains that he has been exuding sad vibes lately. He reasons out that it’s only because there are tons of work and that the cases, in one way or another, involves Jing Zhi. He then diverts the topic and talks about Ye Chen, saying that she should consider the latter because though he may seem carefree, he is serious when in comes to love. Xuan Xuan teases that he sounds like he’s entrusting her or something and he dismisses her remarks with “Not refuting means accepting”. She jokingly hits him and instructs him to eat properly.

Jing Zhi is on set, acting out a very dramatic scene. The director, for once, compliments her believable acting, telling her that it’s the best performance from her yet. But Jing Zhi seems not to hear a thing and continues to cry.

Jing Zhi’s gloomy mood continues until it’s time to pack up.  Dong Dong tells her that it’s a wrap but Jing Zhi refuses to go home and asks if there’s a lined up event event for her. Dong Dong answers that there’s one but she already declined the invitation because of her tight schedule. She tells him to call the organizers and inform them that she’ll be there. Dong Dong tries to talk her out of it since the event will be held overseas and it’s tomorrow morning. But she insists and demands that they go. 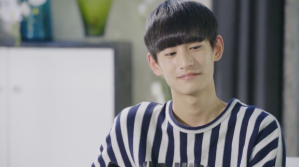 Ling Qiao passes the time by watching Jing Zhi’s recorded interview on TV. He scoffs when the host asks Jing Zhi what her boyfriend likes about her and she answers ‘everything’. When the host proceeds to ask what she and her beau usually fight about, Jing Zhi recalls of the toothpaste incident. She relays that though Ling Qiao repeatedly tells her to squeeze the toothpaste form bottom to top, she always tend to forget. One morning, Ling Qiao reached his limits and deliberately squeezed the toothpaste in front of her. It gave her a fright and from then on, she squeezes the toothpaste like he wants it. Ling Qiao recalls and smiles on the thought.

It’s getting late and Ling Qiao decides to knock at Jing Zhi’s door, tempting her with a midnight snack and her favorite milk tea. No one answered so he opens the door. He finds it odd that it’s empty, remembering that Dong Dong informed him Jing Zhi has no shoot for the evening. He tries calling her but her phone is turned off.

The next morning, Jing Zhi is still not home. Ling Qiao starts to worry and checks his heartbeat. It seems okay so he wonders where Jing Zhi might be.

Dong Dong notices Jing Zhi’s lack of sleep, asking if it’s okay not to call Ling Qiao and tell him where they are. Jing Zhi casually tells him to let it be. Dong Dong tries to sneak a text message but she castigates him, reminding him that she’s the boss and Ling Qiao is only a boarder.

Jing Zhi still doesn’t want to go home, so she instructs Dong Dong to take her to the mall. There, she indulges in a mad shopping spree.

Ling Qiao is busy choosing a bodyguard for Jing Zhi. It’s funny that all applicants don’t match up to his skyscraper standards, citing that they are either too short, too tall, too skinny, too ugly or has the wrong blood type. Haha! The manager gets angry and orders the applicants to beat him up but it turns out the other way around. Tehehe!

On the way home, Jing Zhi tries to boost her confidence by asking Dong Dong if she’s really popular among guys. Dong Dong assures that she is. In fact, if she counts the perverts, her admirers will reach to millions. Haha! Jing Zhi is comforted by his words and tests that if it’s really the case, then he must be willing to marry her. Dong Dong loses focus and nearly crashes the car. He had enough of the drama and tells her to talk with Ling Qiao since it’s clear she’s heartbroken because of him. Jing Zhi rejects his suggestion though. Instead, she tells him to have a drink with her.

After a few bottles of liquor, Jing Zhi is dead drunk. Dong Dong had no choice but call Ling Qiao for help. In no time, Ling Qiao arrives in the bar and carries the unconscious Jing Zhi away. Dong Dong thanks Ling Qiao for the help. He then asks why they fought, adding that since Ling Qiao’s 500 years older, he should give her the leeway. Ling Qiao remains silent and thinks about Jing Zhi’s words earlier.

At home, Ling Qiao panics when Jing Zhi wasn’t in her room. He finds her relaxing on the porch. Thinking that she’s already asleep, he tenderly stares at her. When she slightly opens her eyes and bitterly smiles, he awkwardly looks away. Jing Zhi then blabbers why he hasn’t left yet. She has already accepted her fate. Unlike other women, she’s vulgar, stingy and mean so she understands why he doesn’t like her. She was unlucky anyways so he can leave without worries. He can hide in the forest or do whatever he wants. As for her, she’ll be dead after a few years because of her bad luck anyways. If that happens, she’ll be lucky to be rid of him forever.

Ling Qiao tries to carry her up and learns she has a fever. Jing Zhi continues to express her feelings, relaying that modern women are too stubborn to give up and chooses to suffer even though the one they love don’t care at all. Once again, she tells him to leave because she doesn’t need him anymore. I think her conclusive remarks finally went through him because he ‘kisses’ her on his own accord. Kyaah!