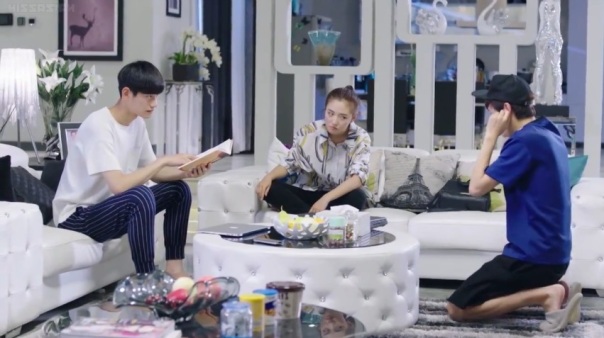 This is a very emotional episode. I believe this is the first time our OTP argued like a couple. I love that Jing Zhi is showing signs of jealousy, which means she’s starting to feel something for him, eh? 🙂

Back to the double date, Xuan Xuan asks if Ling Qiao has a house in China, in which he answers that he has none…yet. He’s planning on buying one of the central mansion islands and live there with Jing Zhi once the construction is done. Shi Guang compliments his good taste. But in Jing Zhi’s mind, she brands Ling Qiao a foolish braggart. Haha! Shi Guang turns to Jing Zhi and then praises her secret advocacy of digging wells in Africa. If he only knew that she’s doing that to change her luck. Haha! 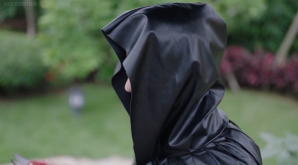 Professor Li receives a call from the enemy and he immediately leaves the lab. Ye Chen sees Professor Li leaving and follows him. However, he gets distracted by the interview video of Shi Guang and Xuan Xuan aired on the roadside billboard and lost track of Professor Li.

The good professor finally meets the enemy and based on his surprised reaction, we can assume that he didn’t expect the enemy to be that person. On the latter part of the episode, we see that the enemy wants the professor to discover the secret behind the monster’s immortality and how it can be killed. He also warns Professor Li not to be too curious and stick to the plan or something bad will happen to his family. 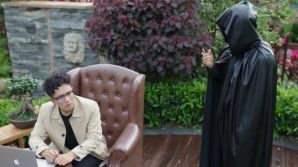 The enemy and Mr. Zhang, the henchman, negotiate with the owner of the “monster” video online. Mr. Zhang comments that the owner is very greedy for asking 5 million just for the video. On the other end of the line, the seller is tracking the enemy’s address. Mr. Zhang then notices that the seller is dragging time and soon realizes that he is trying to locate them. The enemy immediately terminates the conversation.

Turns out the seller of the viral video is Ling Qiao himself. Ah, so that explains his laid-back attitude. With Dong Dong’s help, they tried to lure the enemy and track him down. Dong Dong is apparently disappointed that their plan failed. But Ling Qiao is optimistic. At least, they knew that the enemy is filthy rich and is willing to use money to kill him.

Jing Zhi is getting nervous by the second. The “monster” video is nearing its 5 millionth view and if the owner makes good on his promise to release an HD version, they will be screwed. And the moment of truth arrives. Dun-dun-dun! Out of the blue, the director gladly informs Jing Zhi that there is no HD video, instead, they used the hype to plug their own drama. Phew! Jing Zhi finally breaths a sigh of relief after hearing the good news. 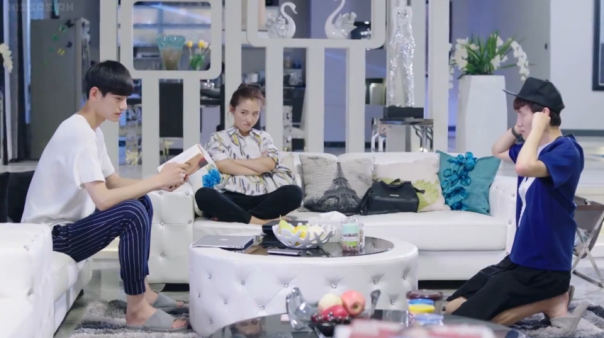 Jing Zhi is excited to tell the news to Ling Qiao and Dong Dong. But of course, it comes as no surprise. Jing Zhi is clearly annoyed upon knowing that they planned the whole thing and they didn’t bother to tell her.

Ye Chen is pretty excited to tell Professor Li that he’s invited to join an international symposium. However, the professor says he won’t be attending due to a half-month long business trip. But Ye Chen knows better.

Jing Zhi is giving Ling Qiao a cold treatment. Ling Qiao is rather confused of her behavior. She retorts that she’s acting like an average girlfriend and besides, normal couples argue. Still, Ling Qiao doesn’t understand as he admits he has never been in love before. 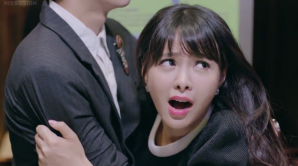 Ye Chen goes to the symposium venue and is joined by Xuan Xuan in the elevator. Xuan Xuan probes why he’s there and he says he’ll be attending a seminar. He guesses that she’s meeting her fiance but she smugly corrects that it’s her family’s hotel. He then continues with a jibe, saying that even though her family is wealthy enough, they are still forming a business merger through marriage. Xuan Xuan reasons that unlike a simple researcher like him who just waits for generous donors to fund his research, they (the bourgeoisie) need to earn money. Suddenly, the elevator malfunctions and Xuan Xuan loses her footing. Ye Chen catches her and laughs. He finds their situation ironic because of all the people he could be trapped with, it’s her. Xuan Xuan pulls away and Ye Chen notices that she sprained her ankle. He tells her to take off her heels but Xuan Xuan refuses, saying that a woman without heels is like a shoulder without weapon. Haha!

Xuan Xuan gets off first. Ye Chen proceeds to the venue and there he meets his senior. Coincidentally, his senior is studying about cell preservation. He shares that frozen cells can resurrect if exposed to the right temperature. Ye Chen relates the discovery to the dormant body’s case and theorizes that the corpse was awakened by Jing Zhi’s blood. Yes, buddy. This is why you’re a scientist. Demn, you’re smart!

At the film set, Jing Zhi is still peeved. The director then talks with her about a possible kissing scene between Xuan Xuan and Ling Qiao. She obviously doesn’t like the idea but since the director is very persuasive, she tells him to just ask Ling Qiao himself. If he agrees, she will consent to it. Of course, he agreed, much to Jing Zhi’s annoyance. Haha!

Xuan Xuan notices the indifference between the “couple” and inquires Ling Qiao about it. He confirms that Jing Zhi is angry at him and asks if she’ll be angry for a long time. Xuan Xuan answers no. And because Jing Zhi is dense, she’ll be okay after a meal. Haha!

Next we see Ling Qiao buying grocery at the supermarket. He’s having difficulty time choosing between two different pears. Thankfully, an elderly lady helps him. After a few minutes, Ling Qiao sees a random thief trying to steal the old lady’s wallet. The poor grandma fights back but the thief harshly shoves her away, causing her to fall unconscious. The thief tries to escape but Ling Qiao pulls him back. Remember he’s a “monster” so with just a little force, the thief comes flying back and sustains grave injuries. The thief then reverses the situation and shouts that Ling Qiao was the one who tried to mugged the elderly.

Ling Qiao is brought into police custody because of the incident. Yan Zi interrogates him and he incessantly denies the allegations. He reasons out that he was just trying to help and breaking the thief’s bones wasn’t intentional. But unfortunately, the old woman is still unconscious so no one can verify his statement.

Jing Zhi arrives at the station and she’s fuming that Ling Qiao called Dong Dong instead of her. She’s the pretend girlfriend after all. Dong Dong explains that may be Ling Qiao doesn’t want to trouble her. 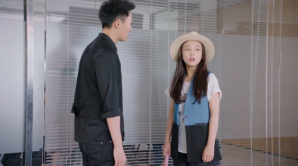 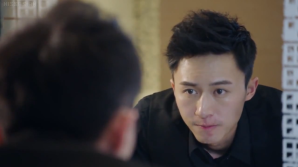 Jing Zhi talks with Yan Zi to ask how Ling Qiao is. Yan Zi scoffs that she should be more worried for the thief Ling Qiao just assaulted. Jing Zhi explains that Ling Qiao won’t hurt somebody unless there’s a reason. Yan Zi had enough and tells her that Ling Qiao is a dangerous man who is not suitable for her. But she differs that though Ling Qiao has some violent tendencies, she still loves him and if he won’t leave, she won’t leave as well. Yan Zi is obviously enraged and suddenly coughs up blood. He tells Jing Zhi to leave and walks off in a hurry. I’m guessing he has a severe illness and that’s the reason why he broke up with Jing Zhi.:(

Jing Zhi is clearly for the worry LIng Qiao caused her. But he remains unperturbed and tells her to stop worrying about him. This riles Jing Zhi even more and declares that if he doesn’t concern then she’s fine with it. In fact, she wants to forget she even met him. After she left, Ling Qiao feels a tingling pain in his heart. 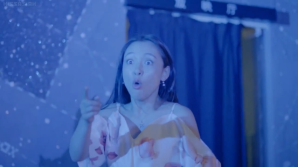 Jing Zhi is still distracted by their lover’s quarrel. Dong Dong recommends that they patch up especially now that they’ll be shooting Xuan Xuan and Ling Qiao’s kissing scene. She dashes to the set and sees them acting the scene. Just when they’re about to kiss, Jing Zhi shouts “STOP”.Haha! Of course, the director is pissed at her.

Jing Zhi flees and cools off outside. Ling Qiao follows her as per instruction of Xuan Xuan. She asks him where he went last night but he passively answers that she has nothing to do where he spends his night. She defends that she has every right because she’s the “fake” girlfriend and a celebrity on top of that. Haha! But Ling Qiao stays undeterred and bluntly tells her she could always break up with him. Of course she can’t do that for two reasons. First, because Mom already warned she’ll cut ties if Jing Zhi gets dumped again. And second, because she likes Ling Qiao, which is obviously a wishful thinking on my part. Haha! Before he returns to the set, she tells him to instruct the crew to just angle the camera as if they were really kissing. Haha!

Xuan Xuan and Jing Zhi eats dinner together. Xuan Xuan delves on the spat between Jing Zhi and Ling Qiao. Jing Zhi relays that she’s angry because she was humiliated in front of Yan Zi. Xuan Xuan wonders if that’s really the case or is it because she’s worried for Ling Qiao. Xuan Xuan teases that if she’s really that in denial, then she could just break up with him. She taunts further that Ling Qiao’s kissable lips will sure attract girls. Haha! Jing Zhi can only threaten to break up their friendship. Haha! Xuan Xuan assures that Ling Qiao firmly “protected his body”. She also advises Jing Zhi to stop the hate because Ling Qiao went to the supermarket to cook for her as a peace offering. She knew because she was the one who wrote instructed him.

Dong Dong picks up Ling Qiao at the dojang but is surprised when he sees him talking and receiving a gift from one of his student’s mom. After they’re gone, Dong Dong confronts Ling Qiao.

Posted on May 17, 2016, in Chinese Drama and tagged Chinese Drama, Drama Recap. Bookmark the permalink. 1 Comment.