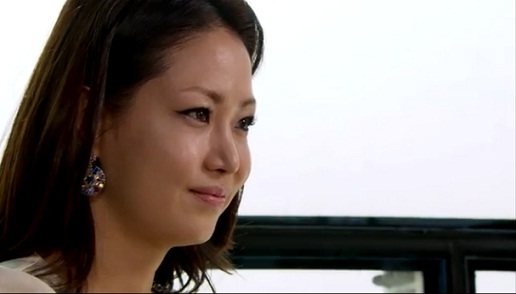 It’ll be an honor to wipe off the smug smile on her face, but then again, the reason behind it makes me think twice.

Giving up. Fighting on. Looking ahead.

Aaahhh! I demand MinJae-InKi lovey dovey moments! Seriously! Not that FoD’s becoming draggy or something, but romantic sparks from our younger leads sure give a lot more spice and sweetness, ne? Just saying.

NaYoung vows to make InKi A star. Huh? I thought she already was?! She’ll have everything: fame, fortune and future. THAT’s if InKi will obey NaYoung’s every freakin’ word. The agency will have to handle her schedule, and of course, her private life.

InKi provokingly asks if this one grandiose plan solves NaYoung’s problem with MinJae. NaYoung arrogantly laughs. InKi must get one thing straight. MinJae is way over her. In 20 years, MinJae will inherit Atlantic Ocean and by then he’ll be married to a well-matched wife, definitely not a scandalous actress like her. For a second there, InKi felt insulted.

NaYoung ain’t done with the rude remarks yet. From a gold-digger to a fellow gold-digger, she gives InKi some words of advise. Marrying to a chaebol’s family is difficult. Everyday she must face humiliation and contempt. It’s like sitting on a cushion with needles, so if InKi’s not up to the task, she better stop aiming too high.

And thus, InKi’s laborious career under NaYoung’s agency begins. Her schedule is fully loaded, not a minute or gig wasted. It’s more of a slave contract than an exclusive contract! Ha! And what’s more frustrating about it is the fact that InKi has no say in the matter.

SoonJa and KyungJae come by the mall for the position NaYoung promised. And if SoonJa thinks NaYoung will give KyungJae some VIP treatment, then she’s dead wrong. Nephew or not, KyungJae must start right at the bottom!

NaYoung rolls the wheel. She must definitely have that Charity Foundation! I still don’t know why she’s trying too hard, but since it’s NaYoung, we’ll expect it’s part of the complicated plan. She presents her proposal to President Kim, who is still hesitant to give the go-signal. But NaYoung sure is persistent. Atlantic Ocean NEEDS this Foundation! Lawyer Hong handles the secret funds, and if something goes wrong, all they got to do is mask the funds through the Foundation. Hmm, she has a point. President Kim considers the proposal, this time thoroughly. 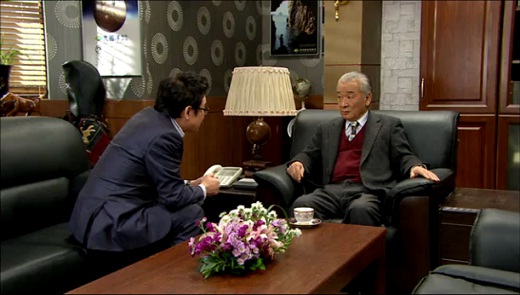 YoungDae warns President not to trust Lawyer Hong too much. But wait! Who says  anything about trusting? Of course, he hasn’t!  Duh! President Kim assures he hasn’t told Lawyer Hong everything. YoungDae gets curious? Then who manages the secret funds? President Kim himself? Maybe YoungJun? But the President won’t tell. His lips are sealed.

A huge wave is about to devour the conglomerate. And it’s the one thing President Kim fears. He needs to think about his next step. He needs to go to Ulsan. He needs to talk with YounJun! I’m beginning to have a bad feeling about this.  Does that mean YoungJun has a greater role in this embezzlement dealings. Well, that sucks!

YoungMin reminds YoungJun not to anger the President. And while he’s at it, he also forbids YoungJun in seeing JungSook. Just so YoungJun knows, THAT woman is NaYoung’s sister. But then, the intensity of his revelation didn’t hit like what he expected. Somehow, YoungJun knows that already, and mind you, he doesn’t care. YounMin is appalled. He knew all along and he’s still pursuing the relationship? It’s a disgrace to the family! What will people think?! YoungJun remains unperturbed. And before the argument gets worse, President Kim arrives just in time.

President Kim is furious. It seems that General Nam handed over some documents to the police! And he’s suspecting that Ae-ri is behind it. YoungJun, however, begs to differ.

And since, President is in Ulsan, MinJae has some time off. He goes directly to the Coffeee Shop, but gets disappointed seeing that Coffee Ahjumma isn’t around. Using his charm and a pinch of persuasion, he gets to have her address.  Eventually, he finds her apartment.

MinJae eats dinner heartily and InSook beams in delight. He then urges InSook to eat.  Ahh, she gets it. He requested a dinner becoz he doesn’t want her to starve. Now that he’s caught red-handed, MinJae has no choice but admit. Though she’s moved, she’s not enjoying the sympathy at all. MinJae is a little sad. He only wants what’s good for her. The doctor said her illness is curable. She must be strong and start by eating well. He scoops a spoonful of rice and lovingly feeds her himself. Awww.

NaYoung patiently waits for MinJae outside. It’s freezing but she endures the chilly night wind just to see her son safe. Honestly, there are some unexpected scenes in this drama where NaYoung really tugs my heart. And this is one of them. Ahem. 😀

NaYoung excitedly runs to him. But he just stood there silently, his eyes downcast. NaYoung wonders if something’s wrong. MinJae cries. He’s sorry for causing her trouble (not going home when she told him to).  NaYoung smiles happily.

Inside, MinJae relays what happened yesternight. Coffee Ahjumma was very sick and there was no one to take care of her. She’s actually pitiful. NaYoung apologizes for overreacting. Then, is this the reason why he cried? Fortunately for NaYoung, it’s not. When he saw her waiting outside, he suddenly comes to tears without realizing it. He doesn’t want Mom to be sick. He wants to take care of Coffee Ahjumma. Though NaYoung is clearly against it, she forces a smile and says it’s okay since it’s the most humane thing to do.

It seems YoungJun was right. It wasn’t Ae-ri who betrayed the President. It has always been YoungDae. That TRAITOR!

YoungDae frantically looks for some documents. SoonJa comes in and pretends ignorance of where the documents are hidden. YoungDae panics. Haven’t he told her those documents were so important? Of course, SoonJa knows. It’s so important that it could even send  his own father to  jail! She’s just teasing him. SoonJa asks if he could really do that? YoungDae, however, is still undecided. He’s doing this so that when everything’s revealed, President will turn to him for help. But if President will still choose YoungJun or YoungMin, then he has no other choice. President must go to jail.

NaYoung meets with InSook. For starters, she apologizes for not believing InSook before. They’re not really good buddies, but still it’s sad news. Actually, NaYoung admires her for bearing it alone. If she was in her shoes, she’ll be tempted to tell MinJae everything. InSook reassures she won’t spill. NaYoung then offers to pay for her treatment. She must live on. InSook bursts in laughter. And then what? She doesn’t want to be in pain anymore. Everytime she sees MinJae, her heartaches. Her only wish is to see her son happy. NaYoung feigns sympathy. One day, she’ll tell MinJae the truth, thus, InSook must not give up.

YoungJun supervises the repairs of JungSook’s nursing home. Ae-ri hears about his whereabouts from Lawyer Hong and she goes to the site to see for herself. And there she witnesses firsthand how sweet and couple-looking YoungJun and his woman are. YoungMin tries to warn YoungJun that Ae-ri already knows about JungSook but he can’t contact him through phone.

Dun…dun…dun. The moment of truth… 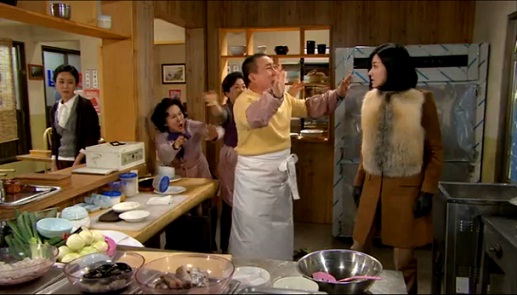 Ae-ri angrily storms in and confronts JungSook, proudly announcing that she is THE wife of President Kim YoungJun! JungSook is rendered speechless. Ae-ri continues to make a scene, yelling and trashing the place! Not a very educated way to deal the matter, I guess. JungSook just stood there without protest, her eyes springing with tears.

When YoungJun learns about Ae-ri’s misbehavior, he rushes to JungSook’s but came in too late. Damage has been done and feelings were severely hurt. JungSook is already out of sight. Good thing, Ahjusshi tells YoungJun where JungSook might be.

He finds her at the shores. He regretfully says sorry for what happened. He wasn’t planning to keep his marriage from her. He just didn’t have the chance to say it. JungSook expected it all along. He doesn’t need to explain. She knew he was married but turned a blind eye. It’s just the result of her own selfishness. YoungJun is a bit relieved. Then, she knew about YoungMin too? Yes. And still, that doesn’t change anything. They could still make this work.

InKi becomes Atlantic Ocean mall’s main endorser. Business-wise it’s an added benefit to the company since sales rose up to 50%. See? She’s already a top-notch actress. She doesn’t need the contract with NaYoung.

InKi whines about her tight and rigid schedule. NaYoung, however, doesn’t give a damn. In fact, she’s already planning to make a press release about InKi being an orphan. It’ll change InKi’s image and it’ll be good for her comeback movie. InKi is surprised. They’ll make up stories? Fine, NaYoung can do whatever she wants. But then if she’s just doing this becoz of MinJae, she’s just making it worse. What NaYoung must do is let her go. It’s that simple. If MinJae finds out what NaYoung’s has been up to, he’ll only pity her and he’ll try to get closer.

Okay, that’s reasonable enough. What if she reveals InKi’s true identity? Maybe, he’ll be disgusted and change his mind. Once again, InKi argues it doesn’t work like that. The younger generation doesn’t care about other people’s past. And besides, it’s not like she  killed someone and on the run. Haha! I loved NaYoung’s guilty reaction when InKi said that. Too make things clear, InKi finally confesses that she loves MinJae as much as NaYoung does, so she’s giving up!

Ae-ri waits for YounJun at the mansion. She’s expecting one heated battle ahead. And yes, he did show up. But he just stare at her with disgust, no words, and then walks off like she’s nothing. Ha! Ouch!

Ae-ri drowns herself in booze. And of course, being the brother-in-law, YoungMin is obliged to comfort her. He’s trying to lighten the mood, but Ae-ri keeps on insisting the “I’m-so-pitiful-becoz-my-husband-is-having-an-affair” dramatics. Without knowing it, YoungMin blurts out that YoungJun can’t possibly have a relationship with JungSook becoz she’s NaYoung’s elder sister.

Ha! Ae-ri smiles. She already knew that the family is rotten, but she didn’t quite realize the extent of their filthiness. Ae-ri throws in some more insults and YoungMin had enough. Actually, he wouldn’t blame his hyung for leaving her. With her awful personality, she was the one who broke YoungJun’s heart. And if he was hyung, he would have divorced her a long time ago.

YoungJun may appear calm, but he’s really feeling the pressure. He shouts all his frustration at the sea, crying like a baby. 😦

President Kim takes some precautionary measures and hides some documents at home. He calls YoungDae and angrily beats him up. He can’t figure how his own son betrayed him! Ha! No secrets are ever kept from President, eh?

Ae-ri returns from Ulsan and NaYoung cheerfully welcomes her back. NaYoung heard about Ae-ri’s ‘outburst’ in Ulsan and praises her for showing the ‘woman’ what she rightfully deserves. Ae-ri laughs. How could NaYoung say that? So, she didn’t know that the ‘woman’ she was talking about was her own sister? Shocks!