This is, in fact, the cutest scene… ever. Kyah! MinJae, how fast you’ve grown! Ahh, I so miss Flames. It has been 2 months since my last FoD post…Sigh…I drafted this episode last January and it’s so hard remembering some of the scenes. Anyways, hope I get it right.

This is one hell of an episode! Everyone, take a deep breath. Brace yourselves. Come and witness hate in immeasurable proportions, love in uncontainable depth and jealousy in its most frightening form!

Look who’s all geared up for her first day at work. Yay! Evil-wife-turned-Lady-Boss, NaYoung, of course.  Phew! This woman sure is tough. She knows the game, and she won’t be fooling around. Take note, it’s her first day. First day! And she already wants to change the whole business set-up!

Well, one thing’s for sure, MiJin ain’t a bit happy about it.

And so, there’s a party. It’s for NaYoung. And everybody’s happy. Nah, not really. In truth, the only one celebrating NaYoung’s success is NaYoung herself. Oh, I forgot. President may be sincerely happy for her. I’m not entirely sure.

Ah, those artificial smiles are killing me!

See?! Even YoungMin ain’t feelin’ the groove. NaYoung, on the contrary, enjoys every freakin’ minute of it. I so miss NaYoung’s sweet, triumphant smile.

Ae-ri’s greed-based anger flares up. How could President Kim choose NaYoung over her?! Clearly, she’s a better daughter-in-law! But what really pisses her off  is the fact that YoungJun incessantly supports YoungMin with the shipyard project. Is he dumb? If YoungMin succeeds, President will give him Atlantic Ocean.

She already has lots and lots to think about. There’s YoungDae and General Nam’s evil plans against President Kim. But YoungJun need not worry about that. She’s sure to stop them. She can’t let him inherit a bankrupted company!

I just can’t get enough of you MinJae. He looks so adorable, ne? It’s his first business proposal and he’s evidently nervous. Thankfully, it turned out well. Good job!

President knows something’s bothering MinJae. Maybe love? Girls? InKi? MinJae laughs.  President sure knows everything. Well, yes. It’s about her. But then, the issue between him and InKi is a thing of the past. It was just a one-time insanity. Besides, it’ll never work out for them.

President offers some advice…both in love and business. To become a successful businessman, one must first learn how to love. Love is something incomprehensible. You like someone becoz you just do. A business needs to be run like that too. You need to be crazy. You can’t do business if you’re so caught up with thoughts.

President Kim: In life,  you can’t leave behind lingering feelings of regrets. You need to try your best and make things happen.

Things are going smooth. At least, for InKi. She’s re-embracing her showbiz career and resolves on leaving all her insecurities behind. Thinking about it, being an orphan ain’t all that bad.

NaYoung is still on festive mood. She prepared a private celebration just for her and YoungMin. She has other things in mind though. She knows he is “heaping” funds for InSook and he is conferring with Lawyer Hong on the matter. As the all-knowing-master planner, she  warns YoungMin to be careful. Lawyer Hong is one crafty guy. He handles the secret funds all by himself. And one day, it’ll be revealed.

And so, in lieu, she offers her “clean” money instead. YoungMin looks at her with guilt… or with suspicion… or both. NaYoung mockingly laughs. He doesn’t need to appear apologetic. In fact, she’s the one who needs to be sorry. She stole everything from InSook.

Right after the private celebration, YoungMin gives the money to InSook. She’s rather happy and relieved. She even cries out of gratitude. Yeah, right! Heard about crocodile tears? She then reveals that JinHo isn’t her real brother but just a distant cousin. When he learned that she’s having an affair with YoungMin, he used it against her. He threatens to tell everyone that MinJae is his son (not YoungMin’s!), thinking that he could get some money from it. Oh my! So, there really is a possibility that MinJae is NOT YoungMin’s son!

YoungMin assures that everything is going to be fine. She doesn’t have to yield with JinHo’s demands anymore. He already solved the problem. The only thing left for her to do is sell the café. However, InKi can’t do that. She returns the money. For Real?   Some more dramatics?! Give me a break!

How could she sell the café when it’s the only place where she could see MinJae. She doesn’t need money. Seeing her son and YoungMin once in a while is enough. Lies! Lies!

And they part ways. But not before they had THE goodbye kiss. And guess who’s gawking her eyes in raging fury. Yup, NaYoung.  This is awkward. Not to mention, painful, upsetting, offensive!

Guess what InSook did? She smiles snootily. She even dares NaYoung to hit her again.  Ha!It wouldn’t be a surprise if NaYoung took the bait! But she didn’t. How sad. Ahhh, what am I thinking?!

President Kim is getting impatient and he’s pushing YoungMin to the wall. If he can’t handle the  prject or the position, then he better give it to someone who can!

After the bawl out session from President, YoungMin bumps into MinJae. He recalls InSook’s revelations. He stares intently at his son’s face, which BTW is creepy. What if MinJae isn’t his son? Could there be more birth secrets out there?

YoungJun buys an old warehouse for JungSook. Awww. She was taking care of elders, right? Well, when he saw the place, he immediately thought of her. It’ll be the perfect home for her cause. JungSook is overwhlemed. She can’t accept such a very expensive gift. But YoungJun won’t take no for an answer.

YoungMin follows YoungJun to Ulsan. His mission: Convince YoungJun to return with him to Seoul. But then, he unexpectedly sees Hyung walking together with JungSook. His wife’s sister! Seeing, YoungMin, JungSook runs for her life! Ghosts from past hunts her. First, InKi then now, YoungMin. The poor girl is terrified.

YoungMin fails to persuade YoungJun. YungMin: “I don’t care whether you ruin your life or not, but don’t ruin my future as well”.

MiJin can’t take it anymore. She must resign. It’s so uncomfortable working with NaYoung. Every time she looks at her sister-in-law, she feels sick!

Now, it’s YoungJun’s turn to visit YoungMin. He wants Little Bro to stop meddling with his life. YoungMin is pissed. Just for that Sushi woman his brother is willing to give up everything! How could his Hyung change so much? How could he ever let his most respected  brother crumble apart?

YoungJun: That woman is someone who found the thing I forgot. It’s not like the dirty relationship you’re imagining. She’s given me hope. The courage and hope to start again. You probably won’t understand what it means.. since you’re no longer the younger brother I knew. You said your respected me right? However, I wanted to be you. I was jealous of you because you wanted to live differently from father. Do you get it? YoungMin you were my hero.

After the brotherly talk, YoungJun went to JungSook. He wants to tell her that he’ll be going back to Seoul. But then she won’t talk to him.

MinJae is excited to see  InSook. This time, President comes along.  InSook is scared stiff. Will President recognize her? No? Yes?  But then, his reaction is too passive to tell. 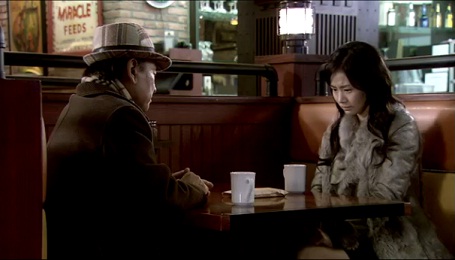 President Kim met with her in New York. He tried to bribe her, just so she’ll leave YoungMin alone. She was being stubborn back then. She can’t. President mocked at her pretences. Why? Becoz she’s pregnant? Even if she is, he won’t recognize her or the child.

What?! So President knew MinJae isn’t NaYoung’s son? I wonder. The birth secret is not a SECRET after all.

InSook cries at the thought.. but laughs at the memories. Yeah, don’t ask me what I mean. I totally don’t understand either. A mixture of happiness and sorrow.  Or maybe, she’s just being plain crazy!

All the while, Ae-ri tries to change General Nam’s plan of exposing the secret funds. She even suggested that he beg President Kim for forgiveness. It’s all about brains, not force. But General Nam sure is prideful. Nope! Surrender and retreat is not in his dictionary.

YoungJun finally resigns. He wants to put up a business. It has been his dream for the longest of time. President is furious. Then he better leave! He won’t be supporting YoungJun’s so-called dreams! Dreams are for the starving. YoungJun is gravely disappointed. That’s the very reason why he can’t work for President anymore. He had always clinged to President’s every words… until now.

She informs  YoungMin and here’s his reaction. Happy? Frustrated? I give up! You be the judge. I don’t understand what’s going on with his mind.

Next, we see YoungJun in his newest hair style. He is officially disowned by the President. Hmm, is it really necessary to change image?! Haha!

He went back to Ulsan… to JungSook. YoungJun: ” I missed you, so I came back sooner”. Awww.